WorldPeace vs. The State Bar of Texas

Click here for an in depth view of John's general philosophy.

WorldPeace is one word !!!
Until we write WorldPeace as one word,
World and Peace will continue to be two things.

The Texas Rules of Disciplinary Procedure is defective and the application of the TRDP to the attorneys in by the Commission for Lawyer Discipline and its Chief Disciplinary Counsel Dawn Miller is corrupt.  The refusal of the Supreme Court to consider my Applications for Writs of Mandamus that are directly on point and show the flaws in the TRDP (which the Supreme Court, not the legislature, promulgated) is a violation of its mandate to do justice as well as arrogant and a foisting of a draconian Gestapo Inquisition disciplinary process on all the attorneys in Texas.

The lessons to be gleaned here are that the Supreme Court intends to support without modification or clarification the TRDP which it promulgated and which allows the Commission for Lawyer Discipline and its attorneys, employees and agents to selectively adhere to the TRDP under Rule 15.11 TRDP?s carte blanc grant of immunity while strictly enforcing the provisions of the TRDP against the respondent attorneys.  This is unconstitutional.

The disciplinary process in is an arbitrary process in which the lawyers in this state, out of fear of losing their license, accept as the Jews accepted the death camps in .  As for John WorldPeace, if I lose this fight with the Commission for Lawyer Discipline and lose my license based on the facts in the frivolous and groundless complaints against me, then there is no justice and the license that I am seeking to maintain is not worth the value I placed on it.

Every bad ruling from any court further weakens the public?s respect for the judicial system (which by the way supported slavery and the genocide and continued subordination of native Americans and second class citizenship for women) and is an impediment to the goal of a true democracy based on justice and equality.

Long after this matter is resolved and long after most of these judges fade into obscurity, I will still be John WorldPeace.  For now, I will not go quietly and meekly into that perceived hell of disbarment.  I will fight because I would rather lose this battle than live in fear of a life without a law license.  I will fight because I do not derive my status in the world society from being an attorney but from being John WorldPeace.  I know not what course others may take but as for me, give me justice or give me freedom from the State Bar of Texas.

PROBLEMS with the Texas Rules of Disciplinary Procedure.

FAX OR EMAIL THIS WEBSITE TO OTHER TEXAS ATTORNEYS.

REMEMBER, THE LICENSE YOU SAVE MAY BE YOUR OWN!

Out of the night that covers me,
Black as the Pit from pole to pole,
I thank whatever gods may be
For my unconquerable soul.

In the fell clutch of circumstance
I have not winced or cried aloud.
Under the bludgeonings of chance,
My head is bloody, but unbowed.

Beyond this place of wrath and tears
Looms but the horror of the shade,
And yet the menace of the years
Finds, and shall find me, unafraid.

It matters not how strait the gate.
How charged with punishments the scroll,
I am the master of my fate;
I am the captain of my soul.

It is not the critic who counts; not the man who points out how the strong man stumbled, or where the doer of deeds could have done better. The credit belongs to the man who is actually in the arena; whose face is marred by dust and sweat and blood; who strives valiantly; who errs and comes short again and again; who knows the great enthusiasms, the great devotions, and spends himself in a worth cause; who at the best knows in the end the triumph of high achievement and who at the worst, if he fails, at least fails while daring greatly so that his place shall never be with those cold and timid souls who know neither victory nor defeat.    -- Theodore Roosevelt

Two roads diverged in a wood, and I --
I took the one less traveled by,
And that has made all the difference
-- Robert Frost

How can we manifest peace on earth if we do not include everyone (all races, all nations, all religions, both sexes) in our vision of Peace? 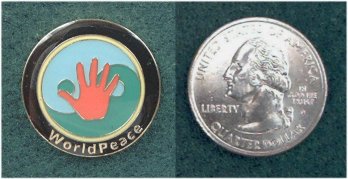 To order a WorldPeace Insignia lapel pin, go to: Order

To the John WorldPeace Galleries Page


To the WorldPeace Peace Page